Happiness Can Be Radical

That’s funny, and to some extent true. Of course we should be disturbed about the state of the world, and our responsibility for it as privileged people and as Americans. It is horribly wrong to ignore the prevalence of war, rape, starvation, exploitation, and environmental degradation.

I once believed that being radical meant that one ought to be miserable, endlessly full of angst and guilt. I don’t think so now. Yes, we need to be mindful that our nation thrives on the blood of others, and to do what we can for peace and justice, which are the conditions of happiness.

But it is possible to be righteously angry and activist and at the same time be happy. In fact, I think it is important to realize that happiness can be radical. Not a shallow, “what, me worry?” attitude, but that’s not real happiness anyway.

Happiness  requires satisfaction, and probably everyone who reads this article has the minimum conditions for satisfaction. We have enough to eat, we probably have a roof over our heads, we probably have someone who cares about us. We probably have an income, even some discretionary income. The media encourage greed: We tend to compare our situation with that of the rich, not the poor. But by worldwide standards, we are rich. Capitalist society is always telling us how many more products we need to be happy, but we really don’t. Indeed, the endless chase after those material goods can’t make us happy, and perhaps one reason the fundamentalists are so successful today is that people realize that and are desperate to find meaning in their lives.

Feeling that our lives have a meaning is necessary to satisfaction, and certainly to happiness. I find a large part of that meaning in feminism.

Yes, there are painful things to learn when one becomes a radical feminist. It is painful to learn how many men rape, abuse and objectify women. It is disgusting, depressing and frightening. It is just as bad as learning that your own country wages unjust wars. But knowledge is the first step to freedom.

I heard Alice Walker speak a few months ago (in 2006). She is excruciatingly aware of all the evil in the world, but she said that it’s wonderful that for the first time in the world, so many people are aware of the cause of their oppression. “They can oppress us, but they can’t fool us” (at least, not as many of us), she said.

It is far better to understand what is happening to us than to internalize our discontents. We aren’t lesser beings because we are women. It isn’t our fault that we aren’t rich and famous. We aren’t ugly because our looks don’t match male standards of beauty. We aren’t provoking sexual harassment or rape just because we walk down the street. We aren’t inadequate if we feel overburdened by caretaking and other work.

But radical feminism means more than just knowing about our oppression. We have poetry, we have art. We have other feminists. We can speak and write and tell each other what we really think.

Even if there aren’t as many forums for radical feminism as there were in the 1970s or 1980s, there still are ways we can meet other feminists, communicate and act.

Leading meaningful lives requires being part of a community or a movement. We can debate to what extent we now have a movement or a community, but we do have some connections. We have a context in which to speak and act.

All of that can bring happiness—if we also take care of ourselves. If we find the beauty in the world as well as the oppression. If we seek out what we love, whether that be sunsets outside the city or bustling streets and crowded cafes. For me, it’s the song of small birds and the cackling of geese, the wind in the trees and reflections in water. We need balance, doing and being, action and reflection, connection and time alone.

We don’t all necessarily have a chance for all of those things, but if we are feminists we understand that we have a right to try to nourish ourselves when we can. Our purpose in life is not just to serve others, although of course our lives are bleak if we think of no one but ourselves.

Other feminists have taught us. Virginia Woolf taught us not to take too seriously the professions and processions of men. Mary Daly taught us to love being “revolting hags,” to be-wilder.

In Alice Walker’s book of essays We Are the Ones We Have Been Waiting For, she tells how Buddhist teachings have helped her find happiness within herself. She finds wonder in the magic of nature and, she says, “despair cannot share the same space as wonder.” She says “the experience of happiness is something one never forgets” and that can keep us going.

Writing about the suffering of African-Americans, Walker says, “We can turn our attention away from our oppressor—unless they are directly endangering us to our faces—and work on the issue of our suffering without attaching them to it.”

Walker continues, “Suppose someone shot you with an arrow, right in the heart. Would you spend your time screaming at the archer, or even trying to locate him? Or would you try to pull the arrow out of your heart?” We must “honor our broken hearts,” Walker says.

“This is a time,” she says, “when all of us will need the most faithful, self-generated enthusiasm…in order to survive in human fashion.”

She hopes we can “learn to blossom in our rotten log” and “save enough of the burning house to live in, in peace.”

Walker sees happiness—a happiness based on loving the natural world and its people—as the radical—and perhaps the only—way to survive.

I believed that before I read her book, and she reinforced that. The men in power don’t want people who reject them to be happy. As Audre Lorde said, “we were never meant to survive.” Finding ways to be happy and to let that happiness nourish our work is radical. And it is still more radical to try to inspire happiness in others. 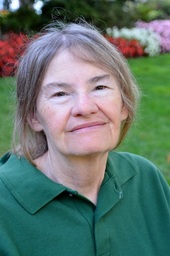