Mandy (Mary A.) Doolittle was Carol Anne's lover from 1994 to her death on June 22, 2009, when Mandy was killed in a Washington Area Metro crash. She died two months before her 60th birthday and had been planning for her birthday party.

Mandy hailed from Dallas. She liked to say that she was a cowgirl. She loved to ride horses and was proud of Texas women like Ann Richards, Sissy Farenthold, and Barbara Jordan.

Mandy studied art history at Rice University. After she graduated, her love for art sent her to Rome, where she lived for eight years. After she returned to the US, she earned a master's degree in textiles at Texas Women's University. She worked with the Kansas Commission on the Arts as a circuit-rider, going from town to town helping people with community art projects.

She obtained a fellowship from the National Foundation for the Arts that took her to Washington, DC, where she met Carol Anne. After only a few months, Mandy bravely relocated without having a job in DC. She wound up working at the American Nurses Association, which combined her interest in healthcare with her interest in international women. She worked as a liaison with nurses in many countries, including Australia and Lebanon.

After she moved to DC, Mandy studied pottery and made many original pieces. She hoped to continue her work in art after she retired.

She loved nature, especially wildflowers. She said that going out in nature as much as she could was true re-creation.

Mandy was warm and outgoing. She always complimented everyone on their strengths. She was silly, and just plain adorable. She brought joy to Carol Anne, and to many other people as well. 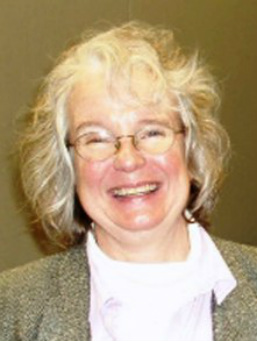 photo courtesy of American Nurses Association
Poems to the memory of Mandy Doolittle
by Carol Anne Douglas
published in
How Can You Say We Aren't Related?
edited by Suzanne Sunshower (Scurfsea Publishing 2012)


The Poetry of Estate Management

I want to write poems for you.
Instead, I write checks
To your mortgage company,
Talk to accountants,
Tell lawyers your story.
I am your personal representative.
Personal -- I know your every mole.

But what do I represent?
You?

The fact that you are dead?

I’m just a sometime poet
But words are friendlier to me
Than numbers.

Do your own damn accounts!

You liked that kind of thing --
At least, more than I did.

I want to praise your hair,
Half-brown, half-silver,
With a white forelock.

“You make me sound like horse,” you’d say.
Well, you liked horses.

Or I could describe how you
Pranced around a room.

Not balance your checkbook.
I’m no would-be math major
Like you.

Adding your numbers
Adds up to love.

photo by Colleen Flannery
The Artist and the Art

Here are the weavings
The fine glazed pots

Where is the maker?

Weaver, your thread unraveled.
Cans’t not weave
A visibility cloak
To show yourself,

Or mend the torn seams
Of your life?

Potter, my eyes are glazed
With tears.

Cans’t not fix your broken cup?
Cans’t not remold
Yourself from clay?

From your kiln
Only ashes were left.

Maker of ceramics
Now encased in one.

You covered cloths and cups
With ancient symbols.

Which symbol, invoked,
Can restore you?

I search through your petroglyphs
For an answer.

Your work reflects you.

But the artist is far greater
Than the art.

I never knew ‘til now
That the artist was the wonder.

That Monet surpassed
The water lilies and haystacks.

That starry nights
Were but stardust to Van Gogh.

It does not assuage my longing.


I Write October With Your Pen
(at Big Meadows Lodge,
Shenandoah National Park,
where we used to stay)

I don your jacket
I wear your hat

Your pack is on my back.
I sit on the lone chair.

The book I hold
The Secrets of Wildflowers

Would have been a gift to you.

You would have reclined
Immersed in columbine.

Alone, I leaf through bloodroot.

Our backyard meadow
Is covered with snow.

You never saw it so.
Why don't you look?

The summer of our lives
Ended in June.

Why not a final autumn?

I don your jacket
I wear your hat

Your pack is on my back.
Why not a final autumn?

I would leap onstage
And stop the play

Claw at the playwright
Tear pages from the book

I would lunge at the sky
Rip the world's blue curtains

But wrest you from Pluto's arms
By any means necessary.

Fools, we named you Pomegranate.
Unpomegranate yourself

They say there is little difference
Between life and death.

I say there is.

I would snatch you
From the Elysian Fields.

Let the heavens collapse
If they will.

I watch before dawn.

The constellations, mystery to me,

With the sun, the cranes stir.

My cousin calls the marsh hawk

We flush a road runner.

Unlike you, it escapes.